HOW TO MAKE A TAILORED SLIPCOVER FOR A CHAIR (or sofa)

Before constructing a slipcover for yourself or a client there's several considerations you should keep in mind:

People want slipcovers for different reasons, such as, they have pets and/or kids and would like to be able to easily clean their furniture, they like the "look", or they think that slipcovering is much cheaper than upholstery. Making a slipcover is not necessarily easier than upholstering a piece and often takes just as much time to do right. If you plan on making covers for a living we suggest investing in one of the training videos available. Like ours, The Slipcover Option. (Shameless self-promotion) Please study Basic Cutting and Sewing and and the cutting and fabric layout portions of Reupholster a Chair before starting.

Our client had a pair of chairs, like the one at right. She chose an upholstery weight fabric and wanted a tailored look. The fabric, heavier than usual for a slipcover, fell quite nicely and covered up the channel back better than a plain material or polished cotton. Because the fabric had a backing it would need to be dry cleaned. Due to shrinkage some materials need to be pre-washed. Fabrics that are to be washed may make it necessary to finish the seams off with a serger, zig-zag them, or at least go around an extra time close to the edge with a straight stitch. Another alternative on covers without welt cord is to top stitch the seams. (See photo in how to Recover a Truck Seat) Most of our fabric distributors recommend dry cleaning to maintain the new look of their materials.

Here's our finished cover. Most slipcovers have skirts. It's important to know if the furniture is going to sit on a carpet or hardwood floors. If your skirt is too long sometimes you can put furniture glides on or cups under the legs. We measure and block out the material in a similar manner as we did in the upholstery segments only we cut the pieces a bit larger. We double hem, that is turn over an extra time, the edges of the seat boxing and outside back, etc., so allow for that.

We were able to cut the inside back and seat several inches longer in order to be able to stuff the material down in back. This helps keep the cover in place. Mark the center of the front and back of the seat and notch the front and back of the seat material. Place the seat fabric wrong side up and chalk out the shape of the seat by feeling for the cording. Also chalk around where the the fabric meets the frame of the inside back. We wanted the new seam to finish slightly beyond the upholstered seat so that it's not sitting right on top causing a bulky look. You remembered to cut your welt material on the bias, didn't you? Fold the seat material to make sure both sides are the same, make 1/2" seam allowance and cut out.

Next align the inside back material in the same manner as the seat. Fold in 2-4 pleats as needed in both upper corners. Pin them or use a hand stapler to hold them until they can be sewn down. Chalk out the shape of the inside back. Sew down the pleats close to the edge of the fabric.

Here are the inside back and seat pieces. Note the cut outs where the fabric will go around the frame. Start from the center notches and sew the two pieces together.

The edge of the seat protruded beyond the lower part of the frame so we sewed in darts at the two front corners. Another alternative (often a better one) is to make the seat boxing in 3 parts. The boxing may also need to taper down towards the back of the seat. See how this is done in Recover a Truck Seat. If your slipcover seat boxing doesn't need to be pieced or tapered then you can sew the welt and boxing all at the same time as in Sew a Boxed and Welted Cushion, otherwise sew the welt down first then start the boxing at the center notches.

Shape and sew the outside back material. Here we've sewn 3/4" Velcro on one side so the cover can easily be removed. Double hem the boxing and outside back to eliminate the raw edges.

With the slipcover on the chair make a chalk line to mark where you will sew on the skirt. The material for this skirt was self lined, that is, it was simply doubled over. Iron. We cut the entire skirt in one length and placed deep 3" pleats in each corner. You can also make individual panels for each side with a flap at each corner (the common way on most upholstered pieces). Finally we've used a trick our seamstress Layne, came up with to hold it all snugly together. Sew a strip of Velcro to the seam just under the welt and the other piece to the last flap (or pleat). Steam the entire job if necessary. Be proud! You've completed making a tailored slipcover. 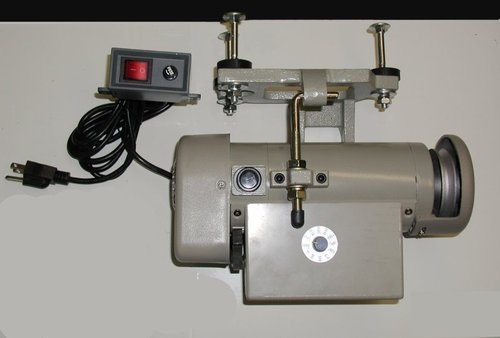 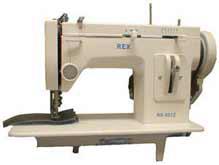