And Plaids and Other Hard to Match Fabrics 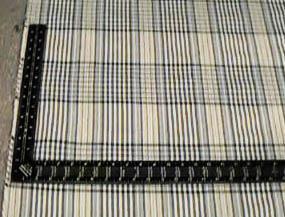 Here's a "fun" plaid to start with. If plaids aren't difficult enough, this one is nearly an inch off from being straight from selvage edge to selvage edge. When I was cutting a long (112") window seat and flipped over the material to match the other side, it was off over an inch and a half! The few bucks a framers square will cost you will save you a lot of grief. I blocked out the two plates on this job and pulled the fabric diagonally until I got both plates pretty straight front to back then sewed up the cushion matching the boxing on both sides as usual. This fabric steamed well to get out any puckers caused by forcing the material to match. Plan out a job like this before cutting to make sure you have enough fabric to have the same pattern centered on the plates and that all the pillows will be the same. I've had plenty of times in the last 25 years where I've had to get a 6 yard chair out of 5 yards. You don't want to have to order more fabric because you are a few inches short. Since most window seat cushions are cut on angles with either the front or back being wider you can save some fabric by cutting one side (with angles) and flipping over and cutting the other side right above where the first side was cut out-pattern permitting, of course. 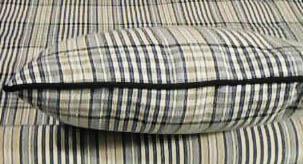 I made several throw pillows which needed to match on all four sides. 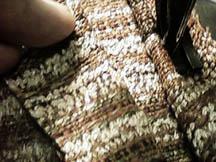 There's several methods to match striped boxings and plates. This way is similar to the way we made the cushion in "SEW A BOXED AND WELTED CUSHION". Sew the welt cord to the plate until you get to the front corner then add the boxing (centered and lined up) and go around in the usual manner. Flip over and sew the plate with welt to the boxing on the first side you left open. Here's a tip when sewing stripes: When you are sitting at your machine the stripes may appear to line up when they really don't because you are seeing them from an angle. Try standing up and over the job to be sewn to initially start the match. Check often to make sure stripes remain straight-tug a little on either the plate or boxing if necessary. 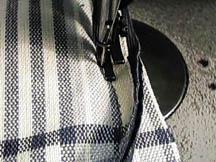 This was the prefered method on our long bay window seat. I sewed the welt to the plate then the plate to the boxing in front. You can line up zipper boxing this way if you want to also. Try to sew just to the left or right on top of the previous stitch so you won't have to go around again. 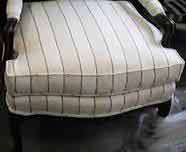 This is an open sided cane back chair. It was easiest to cut and sew the cushion first then line up the seat. 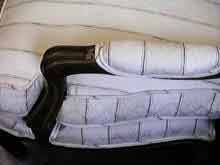 Being open on the sides and back this chair presents the same matching problems as a stripe or plaid ottoman and takes much more time to recover, of course. We cheated a bit and handsewed the material below the arms to the deck fabric to match the already sewn cushion boxing. The zipper boxing needs to be lined up on this job. 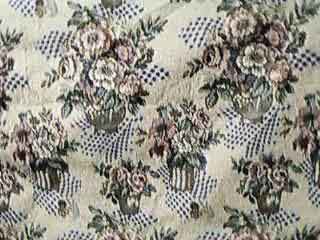 Here was a beautiful, expensive tapestry that caused us a headache. You see there are three different sized bouquets. The obvious match was centering the large one but the manufacturer put four of those across the width of fabric which would make it nearly impossible to split both sides. Centering would have cost several yards of additional fabric (and hundreds of dollars) to this sofa job. The best way turned out be to balance two large designs in each of the two cushions (it barely came out) Think before you cut! Explain the situation to your customer.